TYPOLOGY: the study of types and their succession in biology, archaeology, etc.; the doctrine that things in the NewTestament are foreshadowed in the Old.

North House Gallery is delighted to present this selection of 51 monotypes on paper by Lino Mannocci together with a smaller group of monotypes on vellum.The subjects are drawn from classical myths, Ganymede disappearing into the clouds, for example, and Biblical mysteries, especially the Annunciation.There are familiar themes, notably Susannah and the Elders from Apochrypha, and his own personal recurring iconographical symbols such as the sea, clouds and smoke, the rider, the diver and the happy man.The largely monochrome images are not simply illustrations of particular narratives but express evanescent moments of poetic wonder at the inexplicable and the beautiful in an attempt to capture something of the spiritual for a secular age.

This poetic, mystical quality is inherent in the medium of monotype itself where ink is applied to a plate to be transferred on to paper just the once, or occasionally twice for a second, fainter impression. As a painter, etcher and printer for many years before turning to monotypes in 2005, Mannocci would have been practised in the effects that can be achieved by judicious wiping of the parts of the plate unaffected by etched line or burin. In some of the monotypes here he makes sparing use of additional techniques such as stencil, chine collé, collage and abrading the plate with sandpaper, but essentially the mystery is in the ink, or lack of it. He has a similar way of leaving canvas bare to express light in his paintings, currently focusing on clouds, and in his 'treated' postcards, which he paints over with oil paint or whites out with solvent to make new mysterious images.

Lino Mannocci was born in Viareggio,Tuscany, in 1945 and moved to London in 1968. He studied at Camberwell and the Slade (1971-76), developing his interest in printmaking. Since 1976 he has divided his time between England and Italy, spending the summer months in Montigiano, in the hills above his native Viareggio. Over the last 30 years he has shown regularly in London and in Italy. In the early eighties he was a founder member of the Italian group 'La Metacosa', but left to pursue his more introspective agenda. In 1988 Yale University Press published his Catalogue Raisonné of the graphic work of Claude Lorrain. In 2009 he showed monotypes at the Fitzwilliam Museum in Cambridge where he also curated a show on the theme of the Annunciation. He has curated shows of work by his London artist friends in Italy and at the Estorick Collection, where he also showed his treated postcards of photographs of the Italian artists of the first half of the 20th century. In 2015 his monotypes relating to the Magna Carta, printed on recycled vellum legal documents, were shown at theTemple Church in London and the Galleria Nazionale d'Arte Moderna,Palazzo Pitti, Florence. 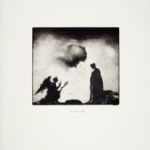 She who was said to be barren 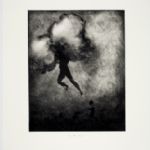 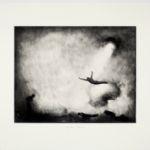 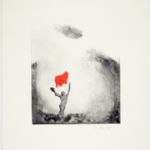 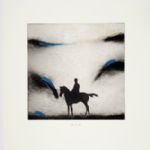 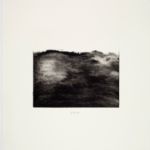 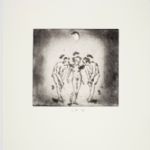 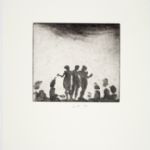 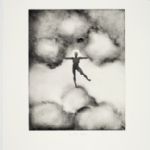 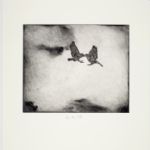 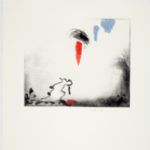 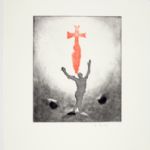 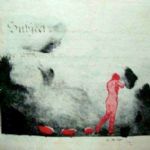 After her husbands death 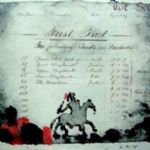