Following his triumphant retrospective last summer at the Centre International d'Art Contemporain at the Château de Carros in the South of France, Pierre Gastaud has entrusted his first exhibition in the UK to the North House Gallery.

Born in Nice in 1920, he drew and later painted, self-taught, from an early age but had to work in a series of jobs before devoting himself body and soul to painting in 1952. His introduction to the circle of artists and writers who surrounded Picasso, including Germaine Richier, Dor de la Souchère, Nikos Kazantzakis and Jacques Prévert, put him at the heart of the explosion of artistic creativity that occurred on the Côte d'Azur after the nightmare of the War years. 'The School of Antibes' met daily at a bistro, christened 'l'Agora', where heated discussions took place about all aspects of modern art. In the 50s Pierre also spent time in England and Ireland living and working with a group of artists, photographers and intellectuals including Roland Penrose, Ezra Levi and Bill Brandt. His wife of the last half century is the English painter Elizabeth Adams.

Pierre has continued to draw, paint, sculpt and make collages for over 50 years in his studios in Paris and in the Alpes Maritimes above Nice. His work is abstract but is based in a passion inspired by reality. He has made frequent new departures which have been triggered by shocks as various as the tearing of an electricity bill envelope, lined with blue, the sight of parrots on a columned perch and a visit to Grünewald's altarpiece in Northern France. In 1968 his exhibition with Xavier Longabardi of collages and metallic forms, 'Structuractions-N', in the Musée d'Art Modern de la Ville de Paris drew strong critical acclaim. Over the years since then, Pierre has exhibited in almost every region of France and in Italy, Switzerland, United States and Taiwan, but not until now in the UK.

He expresses the strength of his emotions with astounding force in form and colour. There is an agression and but also a gentleness; and he aims to reconcile these contradictions to create movement and a convincing harmony. He considers the surface of the work an arena where opposites confront each other like a couple, like everyday life. 'I believe in intuition and what precedes it: being alert, receptive to the slightest palpitation, the slightest movement and having my eyes and spirit open at all times.' 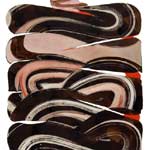 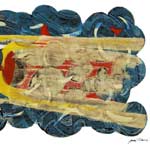