This exhibition is a selection of work by Ron King, artist, publisher and printer from his 40 years at the Circle Press and by his wife, the sculptor Willow Legge. This is their first joint show in 54 years of marriage.

When asked for possible titles for this joint show, Willow’s immediate proposal of Chalk and Cheese and Ron’s equally prompt agreement confirm not only the almost polar opposite nature of their characters and their respective bodies of work but also, after 54 years together, their happy acceptance of this difference. This is, strangely, the first time they have shown together but, as in the amazing cedar-clad house built in 1999 to incorporate both their studios, their work sits perfectly comfortably side by side.

Ron King, probably the most successful and innovative maker of artists’ books in the UK (both his own and in collaboration with over 100 other artists and writers), was born in 1932 and spent his formative years in Brazil, with its exciting, colourful mix of cultures, languages and folklore: making masks, carnival costumes and fighting with kites as a child would remain as memories and inspiration to this day. Being sent alone at twelve to boarding school in England was less of a happy experience but made him productively angry and self-reliant. He developed as a painter at Chelsea School of Art, where Willow was a fellow student, and afterwards for five years in Canada where he also worked as an art director. Back in England, after a spell teaching (and teaching himself) printmaking, he started producing silkscreen prints for the burgeoning print market. A boxed set of these prints became the first publication of the Circle Press in 1967.

Using silkscreen in books was regarded as daring in the sixties, but the complex ideas that Ron and his collaborators have been interested in putting across have required a constant playful inventiveness (collage, wire-embossing) and dogged technical ingenuity (paper-folding, pop-ups, movable puppets, logbooks). His latest collaboration,
The Burning of the Books with verse by George Szirtes, based on the novel Auto da Fé by Elias Canetti, is a project he has pursued since 1971 and is illustrated with photo-collages of suitable darkness and riotous complexity.

Willow Legge’s work, on the other hand, is as quiet and reflective as it is possible to be. She has made a few books using blind embossing for the Circle Press but essentially she has always been a sculptor. She studied sculpture at Chelsea and worked as a portrait sculptor for the five years they were in Canada. Back in England she continued with her sculptural work alongside family commitments and a part-time career in art therapy. She was elected a member of the Society of Portrait Sculpture and from 1987 worked for ten years as a freelance portrait sculptor in the Tussauds Studios in London while continuing, as always, with her own work. Her sculptures include carvings in stone and marble and work in direct plaster and bronze. Apart from babies, which she loves drawing and sculpting, she is inspired by animals and birds. Some, like the alabaster ducks, suggest stillness and tranquility, others typical and convincing movement, like the swans, preening or taking off, or the grazing sheep. The essence of the creature is captured, nothing is missed, but all in a remarkable simplicity of line and purity of form. 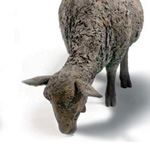 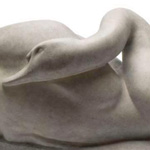 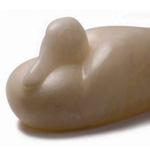 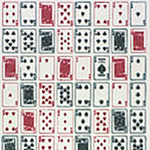 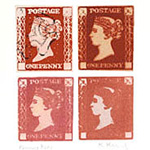 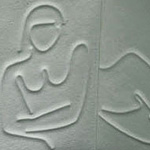 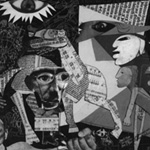