THE ESSENCE OF LANDSCAPE

For Norman Adams, the greatest watercolourist of his generation, great art had to be about something so it might seem strange that throughout his long career he continued to paint the small landscape watercolours, which are the focus of this exhibition, alongside the larger studio paintings in oil and watercolour and huge religious commissions. But discovering and identifying with the work and thought of Blake from an early age meant that for him Nature was the source of all inspiration and that being in Nature was a vital and transcendental experience. Also influenced by Giotto, Turner, Nolde, Picasso and at different times by Permeke and Van Gogh, he set himself the task of transmitting that intangible transcendence in colour with the intangible intensity of music.

Born a Londoner, Norman travelled, with his wife Anna, drawing and painting all over the British Isles and into France in the decade after the second World War. They based themselves in Horton-in-Ribblesdale in Yorkshire for much of the year from the mid-fifties onwards. His early tiny watercolours of the sombre hills and moors around Pen-y-Ghent are perversely some of the most beautiful of all, shot through with surprising flashes of brilliant light and unexpected colour. Summers in Scotland in the sixties and on remote Scarp in the Outer Hebrides in the seventies produced different and delicious experiments with light and water, mountains and mist, often verging on abstraction in their apparent simplicity. Admiration for Van Gogh took them to Provence through the eighties and early nineties and to visions of almost unbelievable bright colour.

The later brilliant works, however different the landscape and light, contain the seeds of their dark opposite - the fruit is often falling -so are identifiable as the product of the same sensibility that sees more than just a pretty picture: they too are inspired glimpses of a bigger picture.

Very few of these ecstatic masterpieces have been previously exhibited. If you have ever felt transformed by a vision in Nature you will feel equally transformed by the The Essence of Landscape. 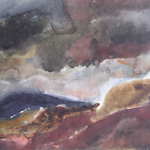 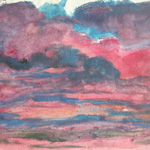 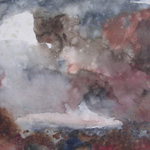 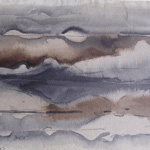 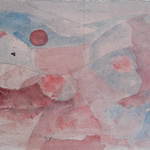 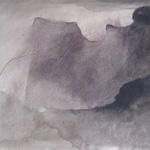 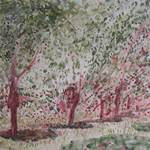 In the Ardeche - Cherry Trees 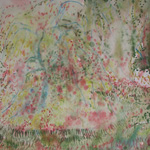