This exhibition was not intended as a memorial when the paintings were selected months ago and wrapped to protect them from extensive building works. But sadly Norman died on 9 March. He had given his frail approval to the card and the show’s title, which alludes to the two symbiotic strands of his work and which eerily has even more resonance now.

In his watercolour depictions of the material world, mainly landscapes, flower pieces (and the odd butterfly or moth), there is an unexpected intensity which comes not just from the beauty of the forms and colours, which are sublime, but also from the desire to reproduce the spirit of the place or subject and his response to it. He has painted the dark moorlands near Horton-in-Ribblesdale, where he and Anna have had a house since 1956, the Atlantic cliffs and skies of Scarp in the Outer Hebrides where they spent every summer through the 70s until Van Gogh’s letters and the call of the sun took them to Provence in the 80s.

Contemporary with the Scarp paintings are two series of recently re-discovered, almost monochrome works based on the Stations of the Cross and the Way of the Cross. Inspired as a student by the paintings of Giotto and the poems of Blake, Norman had worked to great acclaim on two major commissions for churches in the mid-70s. These watercolours, however, are not pious works but an independent and imaginative response to the images which stayed with him from the intense work on those commissions. Although so different from the seductive landscapes, they work with the same power on the solar plexus.

In the more recent large symbolic images the two strands of his work coalesce: angels become moths; moths become angels. Intimations of mortality and the horrors of war are depicted in all their painful questioning with glorious colour. This exhibition, which has been extended through the summer, is a testament to the skills of an artist who wanted to bring joy, meaning and, above all, beauty to the world. 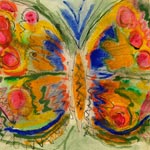 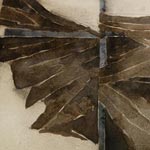