Since his last show at the North House Gallery two years ago, Norman Ackroyd RA has had two contrasting focuses for his work: one the islands off Connemara; and the other the coast of North Norfolk. Indeed he even found himself on consecutive days staring west out into the Atlantic and then east over the North Sea.

Having covered most of the west coast of Ireland over the years, he has recently been risking life and limb on mountainous seas and jagged rocks to produce a suite of etchings and related paintings of the ‘High Islands’ off the coast of Connemara. Fascinated, as ever, by the material evidence and legends of the early Christian saints and later settlements in these isolated places, his aim is not so much to record those as to describe the wild Atlantic backdrop to the harsh lives eked out there over the centuries.

The North Sea presents a less obviously threatening but perhaps a more insidious force as it erodes the east facing Norfolk coast and deposits its spoil on the North Norfolk coast in the form of enormous sand spits and a treacherous, shifting sea bed. In his new collection of etchings ‘Brancaster Roads’, named after the sea roads skirting the coast from Kings Lynn towards London, Norman has studied the changing atmosphere of the salt marshes as they are flooded and drained by the tides funelling through creeks: teeming with wildlife amidst high marsh grasses on a summer afternoon and the contrasting desolation of a flood tide on a winter evening. 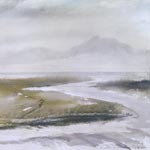 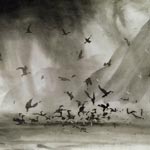