Landscape etchings of East Anglia and France and Remakes & Sequels, a series of etchings inspired by mediaeval graffiti

Born in 1932, Michael Flint had at least two whole successful careers before retiring to devote himself to art and writing. He was a lawyer and a film production executive, becoming head of production for Paramount Pictures in Europe. He returned to the law in 1973 where he became the Chairman of Denton Hall. While still a lawyer he won prizes for his pictures at the Law Society of England and Wales Art Group annual exhibition.

Since 1997 Michael Flint’s work has been shown in numerous exhibitions in East Anglia, London and abroad. This is his first comprehensive retrospective. Many works are inspired by the Suffolk landscape around Orford where he lives: big sky, Orfordness, the River Alde and boats. French vineyard landscapes are reminiscent of etchings by Anthony Gross, acknowledged as an influence. He was Chairman of Sudbourne Park Printmakers from its inception until 2014.

The most recent work, which has grown into the substantial series Remakes and Sequels, is inspired by the quirky pictorial graffiti found carved in Orford Castle and in mediaeval churches. The imagery includes boats, knights, mythological creatures, initials and indecipherable abstract scratchings.

An e-catalogue will be available on request during the exhibition. 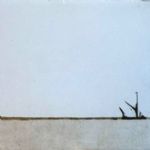 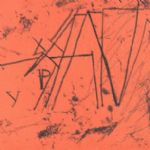 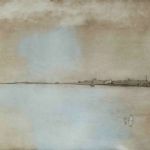 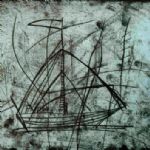 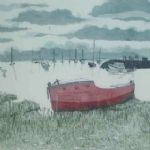 Old Red Boat on the Ore 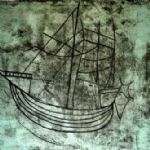 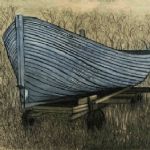 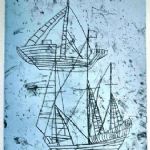 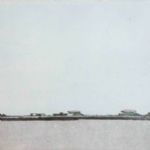 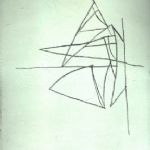 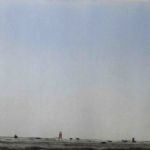 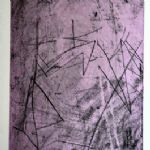 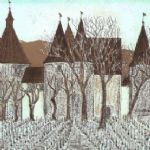 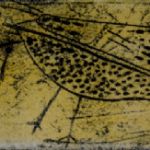