MOSS FULLER was born in Suffolk and studied at St Martin’s School of Art and Printmaking at the Royal College of Art. Since returning to Suffolk in 1972 she has gained a considerable reputation as much for her printmaking and land art, her photography and film-making as for her painting, although her activities are closely developed from her interest in landscape.

Her latest paintings which are the focus in this exhibition have been made on trips to the North Cornish Coast, Walberswick Marshes on the Suffolk Coast and the Derbyshire Moors at Heathersage, three very different landscapes she knows well.

When working outside in the landscape, Moss works very directly and enjoys the tension of clear decision-making that this entails. She uses watercolour as richly as possible, sometimes in conjunction with children’s waxes and candle wax.

STEPHEN READ studied at St Martin’s School of Art and Wimbledon before moving to the US where he completed his MA at the Rhode Island School of Design.

He works in a variety of media including oil on paper and canvas, and more recently has been using digital photography, both as a source and in its own right. Whilst in the US he was influenced greatly by the architecture of New York, as well as the works of early 20th Century American artists such as Marsden Hartley, Arthur Dove and Albert Pinkham Ryder. He started using the human figure after meeting Eric Fischi, whose psychologically symbolic figurative painting of Middle America had a big impact.

Stephen’s current work on the theme of the sea and coast has developed through and beyond these original influences. He lives and works in London but makes frequent trips to the Suffolk Coast with his wife Edori Fertig

EDORI FERTIG was born in New York City and studied at the Rhode Island School of Design and at the Massachusetts College of Art before settling in London in 1984. She has recently completed an MA in Printmaking at Camberwell College of Art.

Edori is an artist who has for many years celebrated ordinary, discarded objects by elevating them to iconic status. Her recent constructions and panels use objects discovered on seaside walks, dug up in the garden or found at jumble sales. She then creates narratives by juxtaposing them with other made reconstructed objects.

Her series of boat sculptures, made from driftwood, investigates the theme of displacement, exploring the experience of refugees affected by world events who are forced to carry only memories of their home with them. 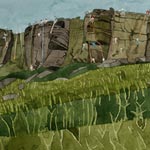 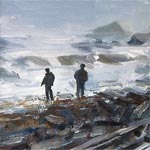 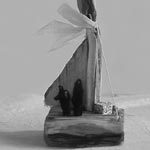