In the four years since his last solo show at North House Gallery, John Cobb has continued to work quietly in Suffolk, although invited to show in prestigious group shows at the Yorkshire Sculpture Park, Bloomberg 1979-2005, the Royal Academy Summer Show in 2006 and the Drawing Gallery; so he can no longer be said to be hiding his light under a bushel.

The constructed sculptures are made from a variety of different woods and range widely in size and in the inspiration or association which is their, often ironically witty, starting point. He compares things that happen within the process of making an object with things that happen in the outside world. For example, an object that begins to lift itself from the ground has associations with other kinds of uplift, be it antigravitational, inspirational, or frankly just that afforded by underwear. So here we have starkness, emptiness, amphibiousness, flatness and lightness in a number of forms often tweaked away from the obvious.

"Jazz isn’t dead; it just smells funny" said Frank Zappa in 1974. Perhaps we could say a similar thing about sculpture in the 21st century. Maybe because the average age of the population is increasing, death and frailty have become more mainstream subjects for artists to ponder. Perhaps it’s just because I am getting older that death is a current preoccupation - perhaps it always has been. This work moves away from the mechanics of putrefaction to more abstract observations and metaphors.

"Over Here - a beckoning form is wound around the idea that 'we all end up at the bottom of the river.' "
"Under There - the reverential object from which the supposed occupant has escaped... or not."
"Plunge - the plunge into amphibiousess: jumping into the sea; rising sea levels; underwater accountancy or just simply take me to the frog pond; continuous evolution."
John Cobb 2009 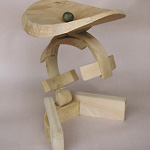 Aftermath of the Broken Ankle 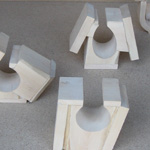 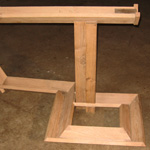 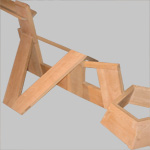 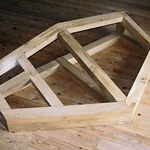