This will be Jason Hicklin’s third solo show at the North House Gallery and a continuation of his project to visually map the coastline of the British Isles, whatever the sea and weather might be doing.

Thanks to two residencies in Gaelic-speaking Gweedore in Co. Donegal where his teaching commitments were limited to two hours in the early evening, he could spend the day drawing and then turn his drawings straight away into etchings in the fully equipped etching studio. The resulting set of etchings are the exact size and shape of his sketchbooks and reflect the immediacy of the initial response to the islands and the wild ocean. With so much ground to cover because of his self-imposed project it has been unusual for him to revisit somewhere but on the second visit he found a deeper understanding of the place, which he considers lends weight to the etchings . . . and another opportunity to sample ‘the best Guinness in the world’.

Still in Ireland, he has taken boat trips around West Cork and to the Skelligs and walked round the Dingle Peninsula and the Ring of Kerry.

He has also immersed himself in the landscape of the Inner Hebrides, camping on the Isle of Mull and visiting Iona, Staffa and Ulva. He brings back the elements in his paintings and etchings: the seas and storms are in fact what they are about, the landscape simply a prop, as in the painting Thunderstorm over Staffa on the invitation card.

Back in England he has continued his quieter series of the Thames and its bridges; and his visits to Suffolk have resulted in etchings of Thorpness and Walberswick. 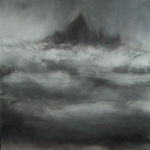 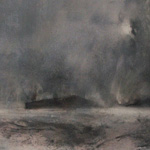