North House Gallery is delighted to present, for the first time in the East of England, paintings and drawings by James Ursell from the far West. Ursell lives and works immersed in the landscape around the Black Hill of Hereford, the only part of the Brecon Beacons vouchsafed to England. These poetic and theatrical paintings are startlingly different from any produced in the relatively flat, dry landscape of East Anglia.

As the name would imply, there is much that is dark about the Black Hill paintings but colour and light are used as counterpoint, both rich and subtle. In Wolf’s Leap, for example, on the near side of the black mountain pool, with its lone swimmer, are rocks in earth colours and on the far side other bathers on the mountain side lit by a pale pink sky. In Night Cycle, two cyclists in the foreground pass a gap in the black hills which reveals a sky of greens and black through which light somehow manages to penetrate and create an extraordinary atmosphere. Reflections in water feature in many of the paintings, though in at least three the river is a mysterious deep red and in others green.

“Out in the countryside that surrounds me, swimming in the River Wye, cycling at night over the mountain passes, in the company of friends or alone, often at the more liminal points between light and dark, I am stopped in my tracks by something, some shadow-like revelation, an experience either of light or a thing that is felt but remains uncertain, a colour, a sense of place, a reverie, that takes up residence within me, fixing my attention until brought back into the world by painting. I am intrigued by the process of absorbing these encounters through the immediate response of drawing outside and the distillation of them in paint months or years later in the studio, and by the passage of an image through the human frame back out into the world anew.”

James Ursell was born in 1974 in Dorset. Having studied at Cheltenham (1992-3) and Winchester Schools of Art (1996), he worked as a builder's labourer for a year, living rough in a barn in mid-Wales before selling his car and catching a bus to Berlin. There he met many artists, most importantly David Medalla the Filipino Kinetic Performance artist who was on a DAAD residency there. David Medalla's paintings sowed a seed of possibility at a time when the medium was lagging in popularity. Ursell had eight shows in the short time he spent there, returning with David to create the "Ecliptic Stelli" a flying camera obscura for the Eclipse in 1999. It was at the time of the Eclipse that Ursell’s first painting, The Broken Flower, came to him. It is now in the collection of Mathias Zintler, in Hamburg. Although Ursell continued to make large monumental installations, most notably The Garden of Love, a body of paintings began to build steadily, helped by a British Council residency at Sacy-le-Petit. Ursell has been exclusively painting for the last twenty years and over the last two years has prepared this body of work for his first show at North House Gallery. 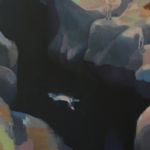 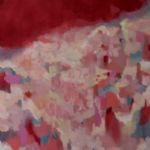 Birthday Party by the Wye 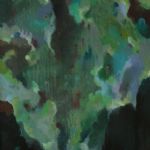 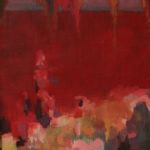 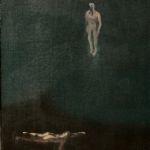 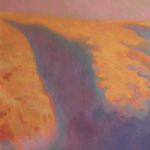 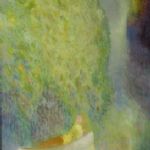 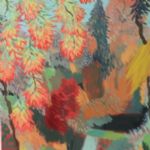 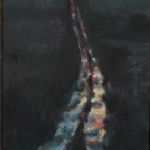 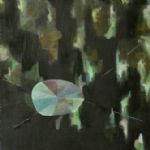