FROM PORTUGAL TO PENANG

Prints and Drawings by Jean Baitey
Paintings by Vrinda Read

Jean Baitey and Vrinda Read have no previous connection, but they seem sometimes to respond to similar sorts of places and sights. However, they express their response in different ways: Jean in terms of marks, texture and atmosphere and Vrinda more in terms of shape and colour.

Jean Baitey studied Fine Art/Printmaking at the West of England College of Art (1971-74) and gained her Dip Ed from Birmingham. She taught in Sunderland and Colchester before her early retirement in 2003. Since first exhibiting at the National Museum of Wales in 1973 she has continued to exhibit in London and throughout the UK and her work is held in public and private collections. For two years in the nineties she and her husband ran The Box Gallery in Tattingstone.

Jean's experience in all forms of printmaking and her love of drawing inform all her work. Her interest in mark-making, texture, surfaces exposed and atmosphere of places visited has continued to evolve alongside exploration of the human form and medical imagery.

Vrinda Read is a young artist based in Suffolk. She graduated in Fine Art and English in 1997 from Christchurch College, Canterbury and also qualified as a teacher of art. Vrinda has recently returned from 2 years VSO teaching in a teacher training college in Guangxi, southern China and has been concentrating on her painting.

Born in Wales, she has lived in China and France. She has travelled through much of Europe, South East Asia and India. Her experience of these many and varied places and diverse cultures continues to inspire her passion for traveling and her creativity. Her visual language seeks to extend beyond the surface appearance of a place to capture its feeling and essence in terms of shape and colour.

A surprise addition to the Portugal to Penang exhibition is the first showing in the UK of photographs by Gangfeng Wang, the first freelance photographer in China. After growing up in Shanghai during the Cultural Revolution, and graduating from high school in 1975, he was sent to work in an orchard on a government run farm. In 1977 he was retrained to play the violin in a Revolutionary Orchestra whose sole purpose was to inspire the 30,000 workers at the Great Leap Forward Commune where he lived. In 1980 he was sent back to Shanghai to work as a machine repairman in the Shanghai String and Net Company.

His sister gave him his first camera in 1981 and he decided to become a professional photographer. With little money or time Wang taught himself the basics and planned his future. In 1985 he claimed to be suffering from "high blood pressure" and left the factory so that he could concentrate on photography. He moved to Canada in 1989 and had many successful exhibitions throughout North America and Asia. From his "Gang of One" studio in Shanghai Wang focuses on life in the city and the surrounding countryside. He also travels throughout China to places inaccessible to the outside world. "I always wanted to be a photographer, to celebrate the extraordinary beauty of people in China". 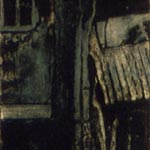 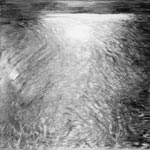 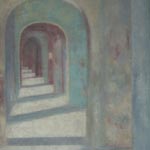 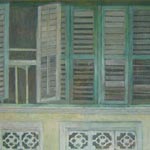 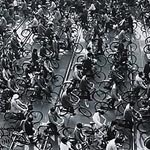 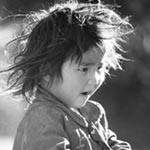 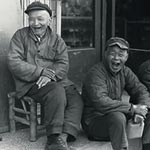 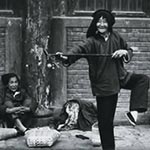