This exhibition charts the progress of Blair Hughes-Stanton (1902-1981) in his most productive decade, 1929-1939.
Previous shows at North House Gallery have focused on different material aspects of his work: the independent prints, engravings for books, watercolours and works on canvas; but this show will show the connections between his work in all media in this seminal decade.

With early recognition and assured skill in engraving and painting he was already confidently collaborating at the age of 27 with his hero DH Lawrence on a special edition of Birds, Beasts and Flowers. Many more engravings for books of increasing refinement followed in the three years as Artist in Residence at the Gregynog Press in Wales.

His subsequent flight to an independent life in Suffolk led to a flowering of self-generated work (influenced briefly by the Surrealists and permanently by Picasso) which gained him the International Prize at the Venice Biennale in 1938.
The watercolours, the large coloured and monochrome engravings, and tempera paintings, as can be seen from the images, show a marked development over the course of the decade in his representation of recumbent women.

The Wood-Engravings of Blair Hughes-Stanton by Penelope Hughes-Stanton, published by the Private Libraries Association can be ordered through the gallery. Price £45 (postage included) 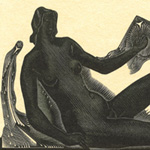 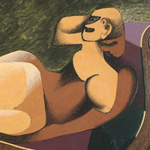