From a Lifetime of Letterpress Printing

North House Gallery is delighted to present an exhibition of Letterpress Prints by Alan Kitching, largely from two definitive periods of autonomous work out of a lifetime of letterpress printing: the ten Broadsides, nine dating from the years 1988-96, with a final one added in 2010; and the adventurous, colourful typographic prints from the last ten years, and ongoing, enabled by the acquisition of a huge collection of large wood type.

The Broadsides
Kitching's 'series of experiments in typography and printing'... 'will attempt to assess and re-state the standards postulated in the traditions of the craft and the technology of printing and thus the implications they may hold for tomorrow.' This reaction to the 'corruptions and caprices of much work of today', at the time of the accelerated burgeoning of computerised graphic design, informed his decision after a decade as a respected graphic designer, to set up his Typography Workshop and go back to print. Starting with typographic samples of stationery all on one sheet, the Broadsides progressed through specimens of typefaces held at the workshop, to a celebration of the typefaces Albertus and Pegasus, designed by Berthold Wolpe, and then one of his first typographic maps, of Clerkenwell, showing the location of the Workshop. The Broadsides increased in complexity and colour and were used in his teaching both at the Typography Workshop and at the Royal College of Art, with input of students and assistants credited. One of the crucial lessons he imparted, that he himself had learned from Anthony Froshaug, was the importance of the meaning of the text to be designed.

The new typographic prints take this concept to another level, where the very constraints of the discipline have become a freedom.

Alan Kitching, born in 1940 in Darlington, served his apprenticeship as a compositor (1956-61). He moved south to become a technician in type composition in the Department of Printing, Watford College of Technology (1962-64), where he also trained in typographic design and co-established with Anthony Froshaug the Experimental Printing Workshop (1967-70). Following Froshaug to the Central School of Art and Design (1968-72) as a visiting lecturer, in 1973 he set up his own design practice before joining Derek Birdsall to form the Omnific Studio Practice. The type and press the practice had bought in 1985 he moved to the Typography Workshop in Clerkenwell in 1989. He taught typography workshops also at the Royal College of Art (1991-2006). By the end of the century his fame and influence in the world of typographic design was acknowledged nationally and internationally and he was showered with commissions, professional honours and awards.

His life and work were enhanced by his vibrant partner, and later wife, Celia Stothard, who was responsible in 1997 for the move to a new studio/house in Kennington and the purchase of all the wood type from G. & M. Organ Theatrical Printers, Wrington, Somerset, which took them a year to clean and move to Kennington. He wrote Celia Sings to celebrate her life after her death in 2010 and has continued with the expressive typographic prints they developed together.

Alan Kitching: A Life in Letterpress by John L Walters was published by Laurence King in 2016. Copies of the book will be available at the exhibition, together with other books, beautiful scarves and unusual Christmas present ideas by Alan Kitching. 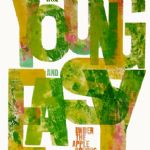 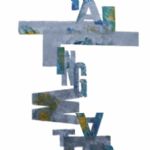 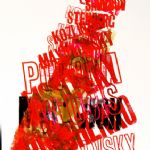 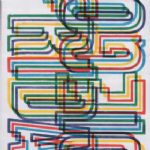 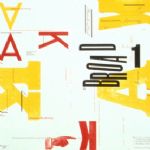 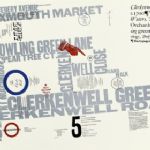 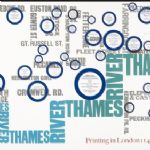 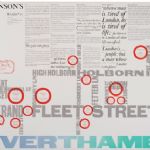 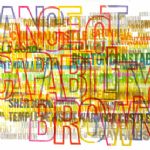 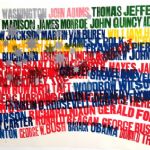 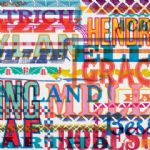 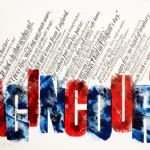 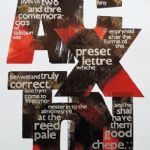 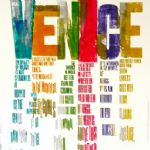 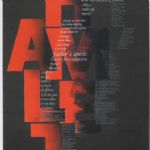 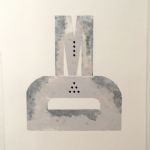 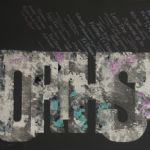